Skip to content
Illustration(s) pertain to the topic addressed in this publication, not the specific research or data presented in the publication 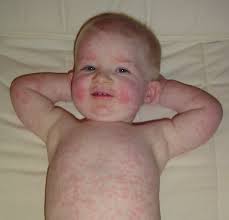 In 1984, simultaneous outbreaks of aplastic crisis and erythema infectiosum occurred in northeastern Ohio. Sera were analyzed from 26 patients with aplastic crisis: 24 had IgM specific for parvovirus B19, five had Bl9-like particles by electron microscopy, and 13 had DNA from B19; no sera from 33 controls had evidence of recent infection with B19 (P< .0001). DNA from B19 was also detected in specimens of throat gargle and urine from two patients with aplastic crisis. Sera from 36 of 51 children with erythema infectiosum had B19-specific IgM, compared with serum from one of 42 susceptible controls (P < .0001). DNA from B19 was detected in sera from only two of 51 patients who had erythema infectiosum. The secondary attack rates among susceptible contacts decreased with age (overall total, 49.6070). Differential rates of asymptomatic infection were observed among black (68.8070) and white (20.0070) household members (P = .003). These were the first identified simultaneous outbreaks of aplastic crisis and erythema infectiosum.  Their occurrence provided an opportunity to study the epidemiology and spectrum of B19 infection with geographically and temporally matched comparison groups; our results
support the hypothesis that infection with parvovirus causes these two clinical entities.
Chorba T, Coccia P, Holman RC, Tattersall P,  Anderson LJ, Sudman J, Young NS, Kurczynski E,
Saarinen UM, Moir R, Lawrence DN, Jason JM, Evatt B